Once we had gravity-fed water, the next task was to construct a shed to store and protect the building materials and tools that we needed to build our first mud house.  At the time, my only vehicle was a bicycle and it would have been extremely burdensome (if not impossible) to have to commute with all my tools, let alone building materials, which would not have been safe to leave unattended at the property since nobody lived close enough to keep an eye on things.  Luckily for me, my Costa Rican buddy, Arbin (who owns the local pottery studio in Tamarindo), was very kind to have lent me his pickup truck numerous times to facilitate building the water tower.  However, he needed his truck for his own transportation and having a shed would have allowed me to continue commuting by bike.  So, as eager as I was to start constructing our new mud home, I decided it would be best to build a shed first.

To avoid squandering the limited funds I had, I decided to build the frame with some of the locally harvested teak poles, and roof it with corrugated metal–albeit an ugly material, but the quickest and cheapest solution available.  Sadly, this is the most typically used style of roofing in Costa Rica for the same reasons, but thin metal roofs in hot climates create structures that are like solar ovens and when it rains, the noise is deafening.  After about a decade they become rusty and even more unsightly, and when the strong winds kick in, the individual sheets can become like flying guillotines.  Good enough for a temporary shed though.  Here is what it looked like once we cleared the brush, dug the footings, and erected the posts and roof:

To sheath it, I opted to use a most unusual material–the discarded bark-covered end cuts of a densely thorned tree known as “pochote”, a waste product from a local saw mill.  We spent hours just removing and transporting the best pieces from a huge pile of scrap wood.  Other than the time and gas money to bring it, this big pile of salvaged wood cost NOTHING! 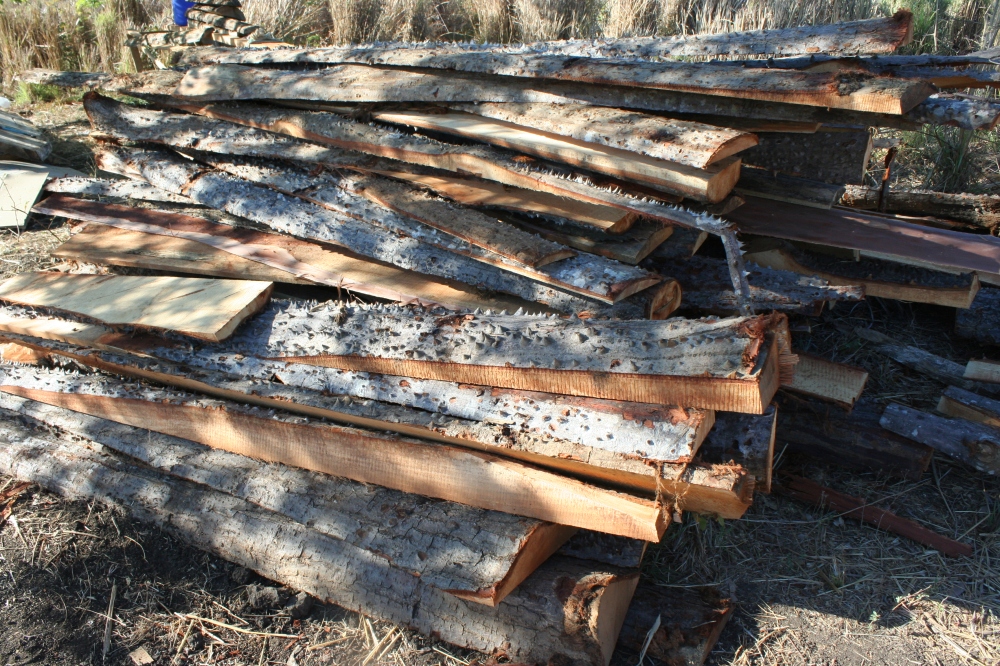 Once the window and door frames were installed (using standard 2×4 lumber), we laid out all the wood on the ground to help us figure out the most appropriate pieces to use, in the best order, for each segment of the shed.  Then, starting at the bottom, we carefully overlapped each piece and nailed them on with long nails. 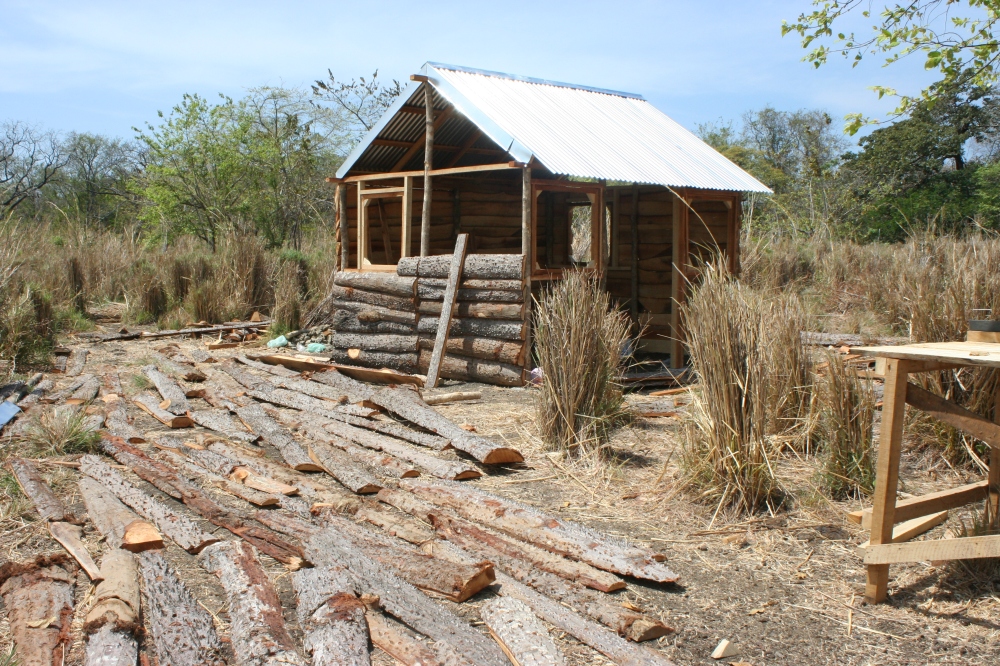 Considering that each piece was covered with dozens of long and extremely sharp thorns, it was more than a bit treacherous to work with but, luckily, my friend Yannai Kalman (who was also kind enough to help me construct the water tower) and I only suffered minor puncture wounds.  If the material was older, we would have been able to remove the bark before using it but that was not an option in this case.

An even closer close-up: 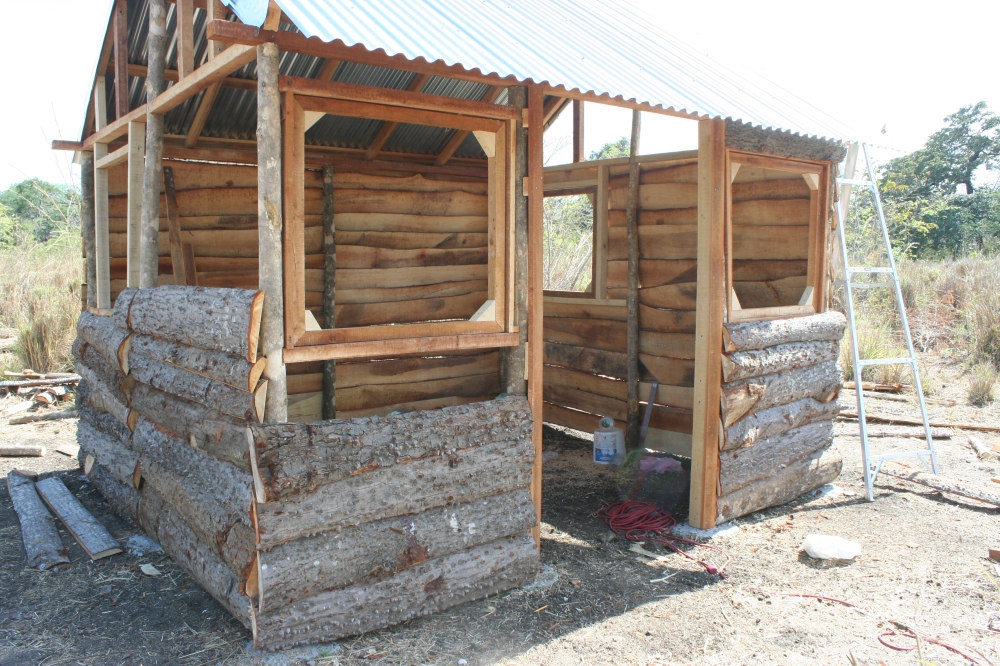 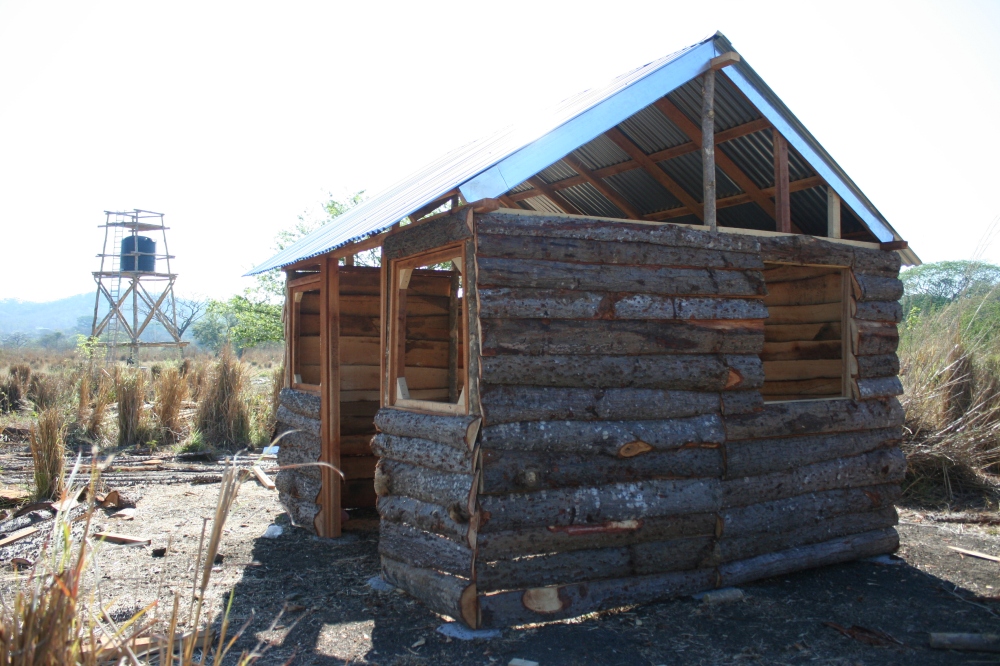 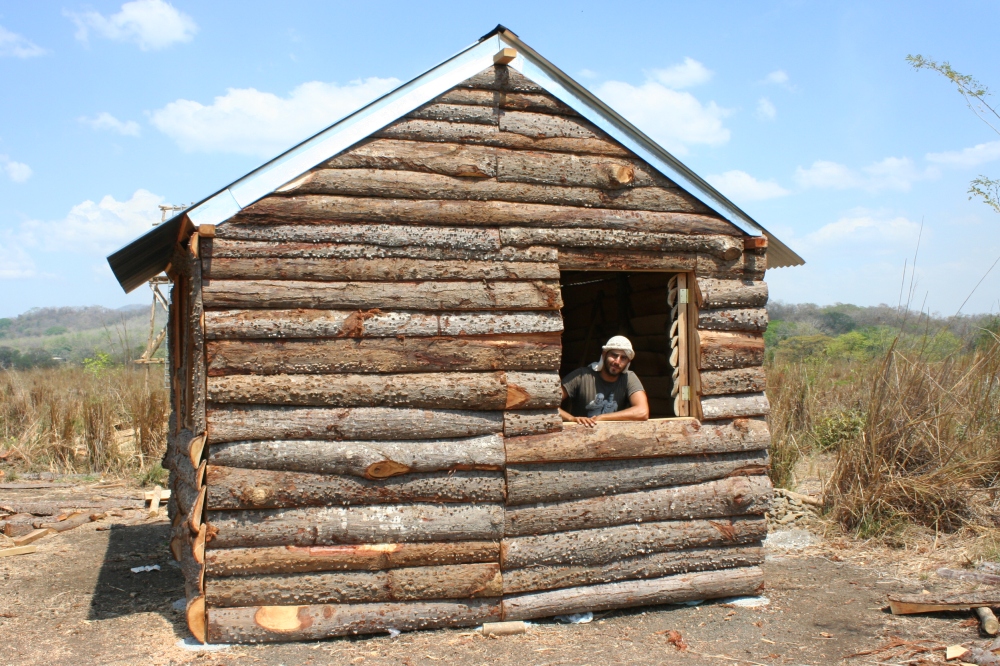 Looking out the window is Arbin’s brother, Jesus, who also helped build the tower.  He focused on building the door and shutters (and their frames) while Yannai and I sheathed it.

For the door and shutters, we used the pieces we had without the bark as a subtle contrast that also helped to lighten their weight.  This is how it looks when it’s closed and locked up…

The three of us finished the shed in just two weeks.

As a sidenote, this fur-lined teacup, spoon, and saucer created by Swiss-born surrealist artist Meret Oppenheim (an associate of Picasso who helped inspire the idea) in 1936, became an icon of surrealist/dadaist sculpture.

Who knows, maybe one day my thorny shed will considered a modern, more vegan-friendly example of surrealist/dadaist architecture… 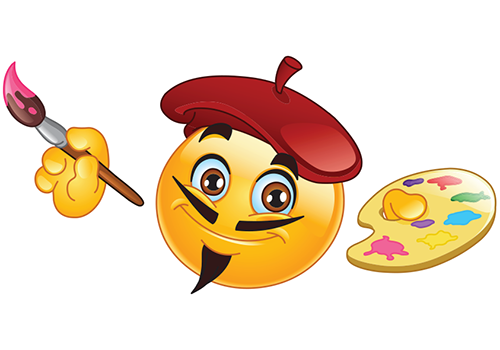 With the scraps left over from the shed, we quickly erected this matching thorny outhouse. 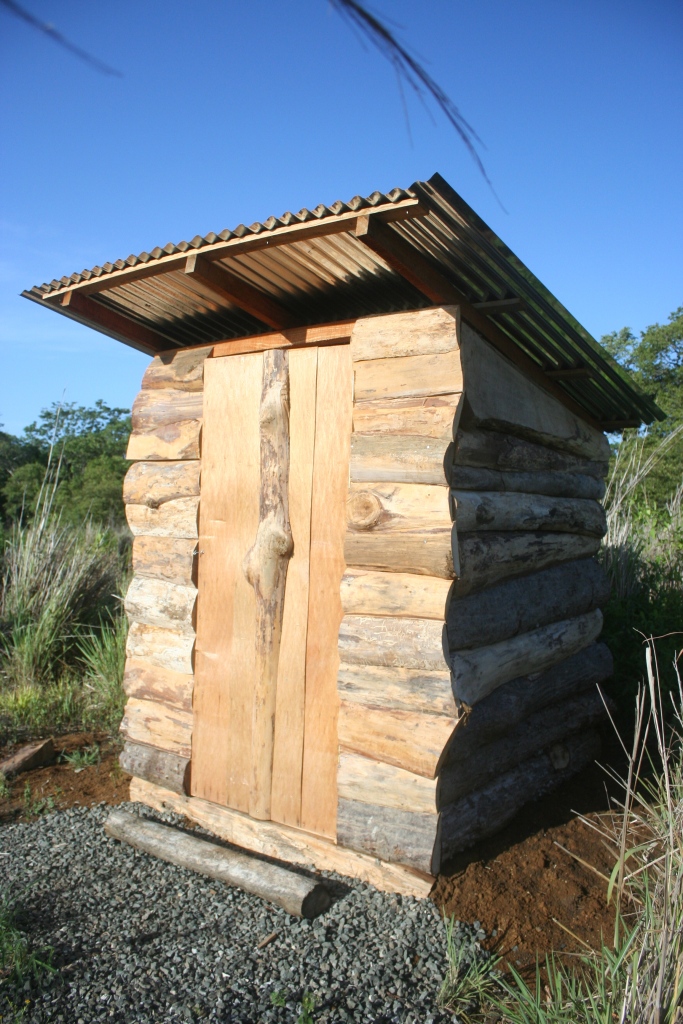 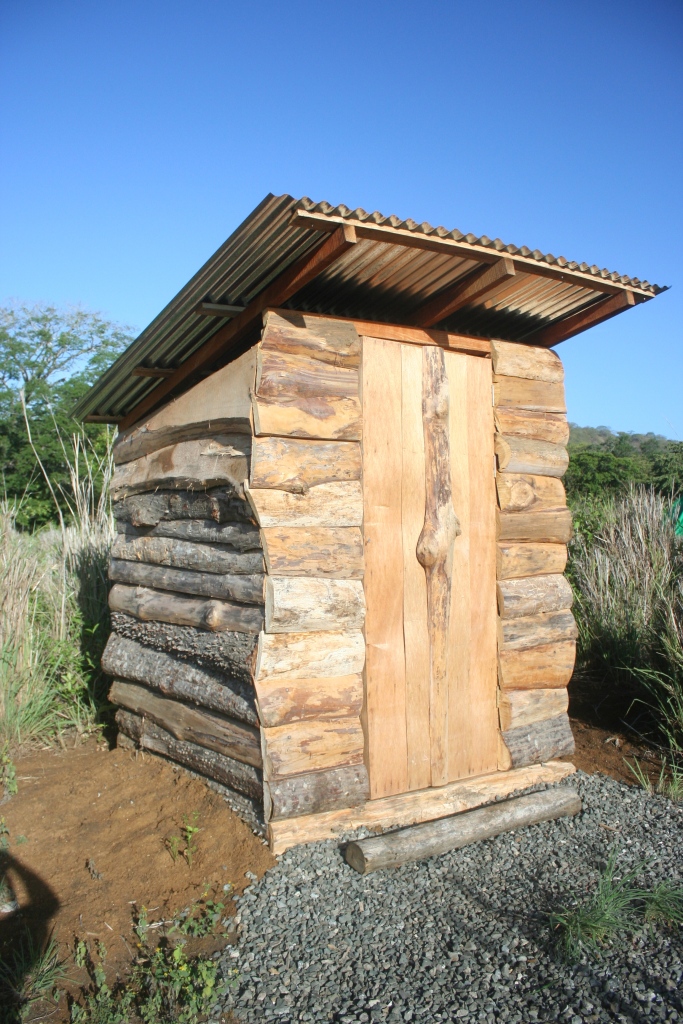 No thorns on the seat, though! 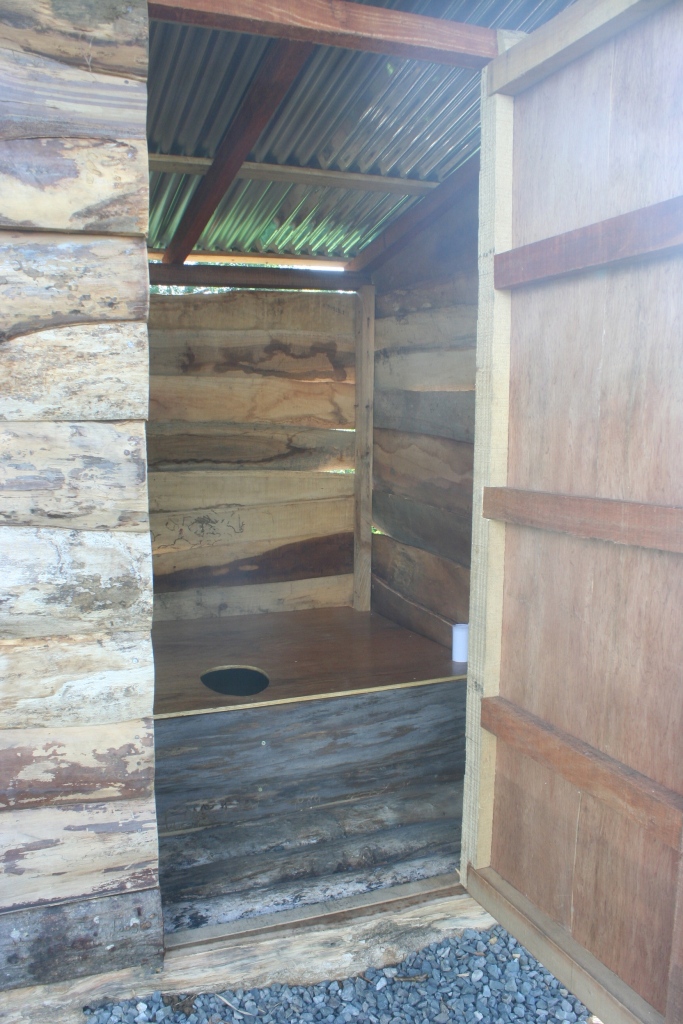